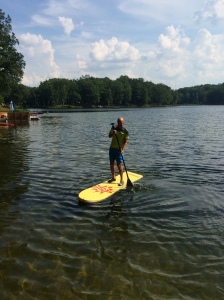 Every August for the last 20 years or so, my friend Chris and I have gotten together for a week at his family’s cottage on Trout Lake in central Michigan. People always ask what city it’s near. Clare, Gladwin, Meredith, Houghton Lake – usually no one’s ever heard of any of them. The cabin is simple; amenities include running water, a toilet and a stove, but not much more.

Which is part of Trout Lake’s appeal. It is far away. The lake is small enough and yet large enough to swim the width and breadth without that being too overwhelming or too easy. No motor boats. No cell phone coverage. No TV. No Wi-Fi. Books, biking, some beer, eating and swimming.

A couple years ago I was introduced to paddle-boarding. Some of you may have done this or you’ve seen them on lakes. They are really the simplest, most enjoyable devices. I thought of the gospel story of Jesus walking on the water the first time I saw one because the person gliding along the surface of a lake almost seems to be doing just that.

Dorothy, who lives next door on Trout Lake, always is adding to her repertoire of kayaks, paddle-boats and similar water toys. Last year she had two paddle-boards, but they were quite different from each other. One was the standard paddle-board that you often see; easy to get on, almost too easy to maneuver. You just step on and begin to float and paddle your way across the lake, or wherever you want to go.

The other one was what I would best describe as a monster. It was thicker, not as wide, not as long, and no one, absolutely no one, could stay afloat. As soon as you stood up, the topsy-turvy nature of the board would send you splashing back into the water. And it wasn’t only old codgers like me who flailed and failed. Even kids with far better coordination and reflexes were unable to conquer the monster.

For some reason, however, I was determined to conquer the monster. That was kind of unusual for me. I’d normally give up, realize my inadequacy or weakness, and move on. But not this time. For one thing I had all day, nothing else I had to do. The weather was great. The water into which I fell again and again was the perfect temperature.

After a couple dozen failed attempts — climbing aboard, crouching, standing, falling; and then climbing aboard, crouching, standing, falling; again and again — I found myself floating along the water, paddling, almost afraid to breathe for fear that would disrupt my balance. My friend Chris yelled from shore. I didn’t even acknowledge him. Looking straight ahead, concentrating on what? I’m not sure, paddling ever so carefully. I remained on board. Until, for some reason, I looked down at the water, lost my balance, and went tumbling into the lake.

What I learned after a couple more brief failed attempts was that as long as I focused ahead, I was OK. Looking down, for whatever, reason messed me up.

Which is pretty much what happens to Peter in the gospel as he walks toward Jesus in that miraculous encounter. It’s what happens to us so often again and again in life.

Peter’s doing fine. Getting along swimmingly, so to speak. Until he looks away from Jesus, until he notices the wind and the waves. He loses his focus, his balance, and stumbles into the sea.

The good news is that Peter got back up. He didn’t drown — this time or the many other times he’d begin to flail and fail. Peter did what we all have to do when we get off track, when we flail and fail: Re-focus, re-adjust, clarify what Jesus is asking, getting a better sense of what and why the church teaches what it does. Keeping our eye and our heart on the Lord, the one who invites us to get up and come to him, no matter how many times we lose our balance and fall into the sea.  TL