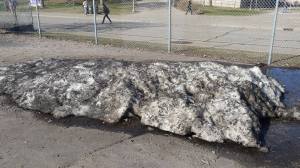 There was one determined pile of snow left on the playground. It was clearly out of place. Even though there had been snow in the air two days before, everyone was determined to replace winter with spring. Except that snowbank apparently hadn’t gotten the message.

The first graders were lined up not far from that pile, ready to begin the day. While they waited for their teachers I asked if anyone had any ideas as to how we could get rid of that snow.

Let’s cover it with hot cocoa, said one girl. I reminded her that meant we’d have less hot cocoa to drink ourselves. That reality gave her pause.

The boy behind her said we should assault it with our lasers. I asked if he’d brought his laser to school that day. He hadn’t. I asked if any other first-graders had brought their lasers to school, somehow squeezing them in to their already seemingly over-burdened backpacks, but no one had. Another good idea dashed, or maybe lasered.

Let’s take a blow-torch to it, said another boy, quickly realizing that we had just as many blow-torches as we had lasers. As well as thermoses of hot cocoa, come to think of it.

The teachers were on their way to retrieve their students when one girl far down the line, politely raising her hand when no one else had, finally intervened. What if we just let the sun melt it? she said. The other children looked at her incredulously. Let the sun melt it? That couldn’t be as effective – or fun – as cocoa, lasers or blow-torches, could it?

Of course we all knew it would work. Yea, by the end of the day, said another practical young scholar, it will probably be gone. And indeed it was. Really all that remained was a slight mound of soot and debris; the gross, ugly detritus of those snow piles that brought so many hours of exhilaration and exhaustion to these same children who now yearned for its dismissal.

The dull boring plan had worked. That was also the option that required just a little patience and trust that somehow it would work out. That’s often how it is when we are confronted by problems or circumstances just a bit more challenging and problematic than a spring-resistant pile of snow. Some of us are problem solvers by nature; we need to make things right. Others fret and worry to such an extent, exerting so much energy, that the issue only becomes more traumatic; or at least in our perception. A few might simply ignore what’s happening and pretend it’s not really that serious.

There might be merit to those and other possibilities, but ultimately the best option might be patience, to wait, to let things run their course, to understand that some things are outside our power and maybe that’s OK, to let the sun melt the snow. TL